By Sally Brandon on February 16, 2017 in Featured, Retirement Income, .

Who decides when the fun has to end? For many women who love their jobs, the answer is – maybe never! Recently, Claire Cain Miller of The New York Times wrote an interesting piece about why, no matter their age, many women stay active in the workplace. Read her insightful article in full, below.

Kay Abramowitz has been working, with a few breaks, since she was 14. Now 76, she is a partner in a law firm in Portland, Ore. — with no intention of stopping anytime soon. “Retirement or death is always on the horizon, but I have no plans,” she said. “I’m actually having way too much fun.”

The arc of women’s working lives is changing — reaching higher levels when they’re younger and stretching out much longer — according to two new analyses of census, earnings and retirement data that provide the most comprehensive look yet at women’s career paths.

Over all, the paths look much more like men’s careers than they used to. Women are more likely than in previous generations to work at almost every point in their lives, including in their 20s and 30s when they often used to be home with children. Now, if mothers take breaks at all, it’s often not until their late 30s or early 40s — and those who leave are likely to return to the labor force.

Most striking, women have become significantly more likely to work into their 60s and even 70s, often full time, according to the analyses. And many of these women report that they do it because they enjoy it.

The data adds a bright chapter to the narrative of women’s progress in the world of work. Even though their participation in the labor force in the United States has flattened in recent years, and as mothers especially face serious challenges, women are working more than ever and getting fulfillment, not just income, from their jobs.

Nearly 30 percent of women 65 to 69 are working, up from 15 percent in the late 1980s, one of the analyses, by the Harvard economists Claudia Goldin and Lawrence Katz, found. Eighteen percent of women 70 to 74 work, up from 8 percent.

This rejection of retirement is more common among women with higher education and savings, though not confined to them. Those who are not working are more likely to have poor health and low savings, and to be dependent on Social Security and sometimes disability benefits, Ms. Goldin said.

Of those still working, Ms. Goldin said, “They’re in occupations in which they really have an identity.” She added, “Women have more education, they’re in jobs that are more fulfilling, and they stay with them.” (Ms. Goldin happens to be an example of the phenomenon, as a 70-year-old professor and researcher.) The two new studies draw their data from the Health and Retirement Study at the University of Michigan and from the Current Population Survey and the Survey of Income and Program Participation at the Census Bureau. The data included surveys that tracked the same women over time; in some cases, the researchers studied respondents’ income tax and Social Security records.

Women now in their 60s and 70s were the first generation to become professionals in large numbers, but that doesn’t explain all of the increase in older women who work, which began in the late 1980s.

For some women, the decision to keep working was unexpected and not necessarily welcome, because of late-in-life divorce, pension or real estate losses, or changes in Social Security. A recent paper by the economists Annamaria Lusardi and Olivia S. Mitchell examined women who were working into old age because they had more debt than in previous generations and lacked financial savvy. Older workers who lost their jobs during the financial crisis were more likely to be unemployed long term — especially women, in part because their résumés tended to be spottier.

But most of the time, Ms. Goldin and Mr. Katz found, women are working longer because of decisions they made much earlier in their lives — to get an education and spend years building a career.

If people work when they’re younger, economists say, they’re more likely to work when they’re older. And because women are marrying and having babies later, they spend more time pursuing careers first. That means that even if they take breaks to care of children, they are likely to return to work and to work past a typical retirement age. Children had no effect on working later in life, the analysis found.

The same thing is happening among women in their 60s in most developed countries, according to data from the Organization for Economic Cooperation and Development.

The most telling discovery here, according to the Harvard researchers, was that women who enjoyed their jobs earlier in life were employed longer, independent of their education or earnings. When asked if they had enjoyed their jobs six to eight years earlier, 85 to 90 percent of women ages 59 to 63 said they had.

College graduates are more likely to work into older age. Of women born between 1945 and 1949, about 50 percent in all education groups were working at age 64, compared with 60 percent of college graduates. But the participation rates of women without degrees are increasing at roughly the same pace.

Diane Tavoian, 64, left college at 21 and worked hourly customer service jobs in manufacturing, in the military and most recently at the post office. She briefly tried retirement at age 61, but it didn’t last long: “It was just plain boring,” she said.

She is now a barista at Starbucks and finishing her bachelor’s degree through the company’s tuition coverage program. “The money is nice, of course, but I did it because I found I could not just stay at home,” said Ms. Tavoian, who lives in Covington, Tex. “I really like the fast pace of it, and I like showing the younger baristas that a frail old lady cannot just keep up with them but pass them by.”

Lee Ann Monfredini, 68, got her real estate license at age 53 after a career in hospital fund-raising and nonprofit consulting; she was out of the work force for several years when her children were young. “I feel 40,” said Ms. Monfredini, a broker in San Francisco. “I play bridge once a week and have lunch with women, but I’m really not that good at the retirement thing. And I love the joy of getting that big commission check.”

There is just one period of life when women are less likely to be working than in previous generations: their late 30s and early 40s, according to the other new paper, by Ms. Goldin and Joshua Mitchell, a senior economist at the Census Bureau. 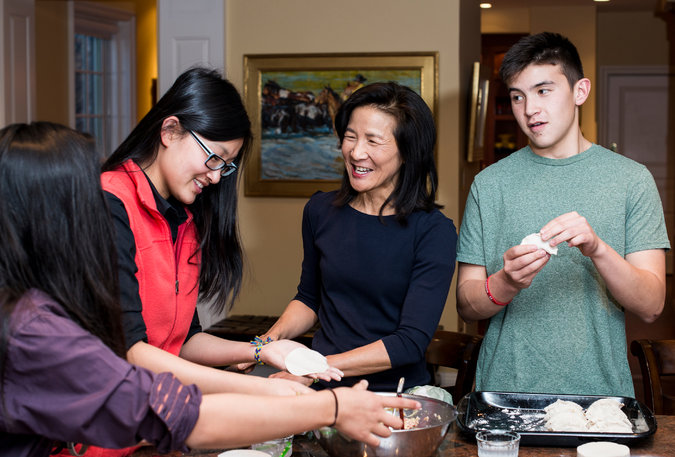 Helen Young Hayes, 54, recently returned to the labor force. “I just have too much energy and too much intensity to not be engaged,” she said. CreditMatt Nager for The New York Times

The decrease in participation is small but noticeable, and is linked to having children. The dip is happening later than it once did because people are having babies later, and because the most recent generations of mothers tend to keep working after their first child is born. The proportion of mothers who quit after their first birth decreased to 19 percent in the early 2000s, from 28 percent in the 1980s, the new research found.

“They try as hard as they can; they don’t leave after the first kid or when they’re infants or toddlers,” Ms. Goldin said. “They leave later on.”

There are several reasons for that decrease in participation, economists have found: the long hours expected in the American workplace; inflexibility on where and when work gets done; elder careresponsibilities; and the lack of paid parental leave, part-time work and affordable, high-quality child care.

It’s too early to know, but the evidence indicates that even these women are likely to go back to work and to work longer, particularly if they have degrees, Ms. Goldin said.

Helen Young Hayes managed $50 billion in investments at a mutual fund in Denver while raising five children. She missed spending more time with them — she watched videos of them after they went to bed — and five children were a lot of work. So, at 41, she stopped working.

A decade later, she returned to the work force, starting a corporation to match low-income people with careers. The idea grew out of volunteer work she had done during her time away.

“I just have too much energy and too much intensity to not be engaged,” said Ms. Young Hayes, 54. Working for 20 years before she left made re-entry easier, she said. “It gave me the confidence to realize there were no limits to my career.”

Sally Brandon is the Senior Vice President of Client Service and Advice at Rebalance. She holds a B.A. from the University of California at Los Angeles and an M.B.A. from the University of Southern California. As a wife, mother and one of the senior members of the Rebalance team, she brings an intuitive understanding of the personal side of retirement saving. Sally began her investment career at MarketRiders, where she supported many of the company’s retirement-investor clients, who collectively have more than 10,000 portfolios and $4 billion on the platform. She is a registered Investment Representative and holds a Series 65 securities license.