By Sally Brandon on December 20, 2016 in Featured, Retirement Investing.

In this recent article, acclaimed “Your Money” columnist Ron Lieber details the importance of emphasizing generosity in your children’s upbringing, and how you can cater charitable acts to your children’s interests, to make for an all around rewarding experience.

This is not a guilt trip. Pile the presents to the sky, by all means.

Trump-hating grown-ups may want to throw every last gift-budget dollar into the Planned Parenthood bucket. If that’s your thing, do it.

But let this column be an additional seasonal reminder that generosity is a trait that nearly all of us share and hope to imprint on the children and teenagers in our orbit. So if you’re so inclined, commit yourself to doing at least one thing before the end of the year to bring the gift of giving to young people.

Here are six ideas to get you started:

FAMILY HISTORY
Why be generous? It’s a perfectly reasonable question for an innocent kindergartner or oppositional teenager to ask.

One of the best reasons is to honor your own family’s history of having been helped, as I’ve written before. Every family has one, if you stop to think about it.

Mine includes receiving financial aid at two schools over the course of a decade, a mother who survived premenopausal breast cancer thanks to some excellent medical care, and grandparents on my wife’s side who survived the Holocaust and were welcomed to the United States.

So tell your family history to your children, grandchildren, nieces or students. Update it each year with new examples of others who helped you out along the way. Kids love hearing these stories, and it helps them understand why you feel moved to support the causes you do.

YOUR CHARITABLE PIE
One of the most meaningful family conversations I can recall resulted from explaining to our older daughter how we divide our charitable budget. To my wife and me, the list of organizations was a pretty good inventory of the things we cared about most.

But was there anything missing, we wondered? There was, according to our 8-year-old, who made the case for donating to a scholarship fund at her camp. 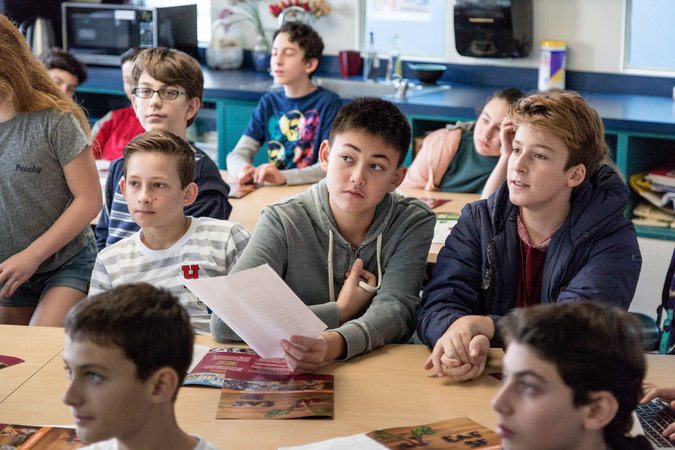 You don’t have to lead with the total dollar amounts or disclose them at all. Instead, drop 100 beans on the table, divide them into piles and then label each pile, noting that for every $100 you give away, this is how you divide it up.

Still, you should be prepared for possible questions about how much you give, which may lead inevitably to ones about how much you make and how much you have. Not all children have the financial knowledge to make sense of the answers or the discretion to keep the numbers to themselves, but by the time they’re in their late teenage years, they are often ready.

FINDING A CAUSE
Not every family, let alone every child, has a burning desire to help in some particular area. Annie Hernandez, the executive director of the Frieda C. Fox Family Foundation, suggested the possibility of a tour.

Call your local community foundation (the local entities that help collect and redirect charitable dollars), ask to speak with a program officer, disclose your budget and see if that person is willing to take you to see organizations and neighborhoods where assistance would be helpful.

No, this is not poverty tourism or akin to favela tours; you’re seeking out an expert precisely to avoid any insensitivity and to try to establish a lasting relationship. And even if the person you speak with can’t help you in person, he or she may be able to send you to other local organizations that are compatible with your general areas of interest.

SCHOOL-BASED FUNDS
The best school-based giving program I’ve ever encountered is the yearlong effort that the seventh graders take on at the Brandeis School of San Francisco.

Rather than give one another token bar and bat mitzvah gifts, the students and their families at the Jewish kindergarten-through-eighth-grade day school take the money they would have spent, toss it into a giant pile and let the children give it away. With additional fund-raising, the total can sometimes exceed $30,000. Essentially, it’s a mini-foundation that opens in the fall and closes the following summer, featuring grown-ups representing charities who visit the school regularly to request a share through pitches to the students.

As part of the school’s Judaic Studies curriculum, students pair off, establish an area of interest, find three local organizations that help in that area and then present one of them to classmates for further evaluation. Criteria for the culling include the importance of the problem, proof of the organization’s effectiveness and how big of an impact the students’ gift could make given the size of the organization.

Each one is ripe material for extended conversation, which is exactly the point. Students can change their minds about their allocation votes at least once before the day comes to dole out as much as $5,000 per group. “Every year at the culminating event, there are parents crying,” said Jody Bloom, who teaches the Judaic Studies class. “It’s a lot of the reason that they send their kids to the school in the first place.” 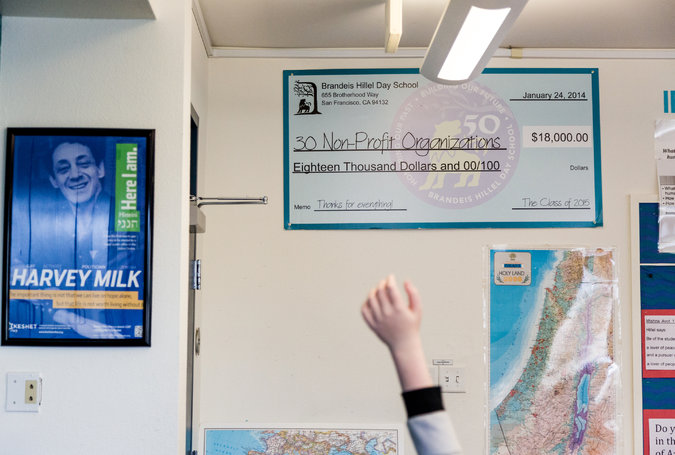 Students at Brandeis, a Jewish school, save the money they would normally spend on bar and bat mitzvah gifts and instead give to charity. With additional fund-raising, the total can sometimes exceed $30,000 in a year.

GIVING CIRCLES
Many schools are not equipped to support curriculums that feature actual dollars, but nothing is stopping parents from establishing something like it outside the classroom. Mandy Kao, a mother of three in Houston and a real estate entrepreneur, had herself participated in a charitable giving circle, where a group of people pool resources to make collective decisions about grant making, when she decided to start a circle for her three boys and other children a few years ago.

The group of Houston-area youths raise money through a Mother’s Day brunch and other activities and receive matching funds from an organization called Asian Americans/Pacific Islanders in Philanthropy.They’ve made grants to youth soccer programs that help refugees and to Big Brothers Big Sisters in an effort to try to encourage more Asian-Americans to serve as mentors.

In Manhattan, Sara Shapiro-Plevan, a consultant, is about to start a giving circle just for boys. She was plotting against the reality that by the time middle school rolls around, some children want nothing to do with members of the opposite sex, while others want everything to do with them. Either way, she figured, it would work better if it was just her sixth grader and his male friends. “It’s an easier way to have what might be a challenging conversation,” she said. “And to do something his mom was asking him to do.”

For many years, Jen Bokoff, a Brooklyn resident who works in philanthropy, has done a one-night-only circle with her family each Hanukkah. She and her relatives each bring $10, regardless of age, and then talk for a bit about an organization they favor. Everyone’s names go into a hat, someone picks and then that person’s organization gets all the money.

SHARING
December can be a sad time for many adults, often because they feel diminished by the lavish holiday tales that flow through their social media feeds. Nevertheless, Ms. Hernandez is a big believer in talking about whatever giving we do, because it normalizes it as a regular holiday activity.

So how best for a family to share in a way that will not subtly shame some other adult having a more materialistic holiday?

Ms. Bokoff is the director of knowledge services at the Foundation Center, which helped build a resource-rich website for families and educators called youthgiving.org. In her world, the giving talk is often around donors’ treasure, time, talent and ties.

Treasure is the money. Time and talent are about volunteering, which children should certainly do too in their areas of interest.

As for the ties, that’s about your network — and for middle- and high-school-age children, their most powerful networks may be digital ones. “They can use those platforms to share causes they care about,” Ms. Bokoff said. “And if they do it, their friends are more likely to as well.”

Sally Brandon is the Senior Vice President of Client Service and Advice at Rebalance. She holds a B.A. from the University of California at Los Angeles and an M.B.A. from the University of Southern California. As a wife, mother and one of the senior members of the Rebalance team, she brings an intuitive understanding of the personal side of retirement saving. Sally began her investment career at MarketRiders, where she supported many of the company’s retirement-investor clients, who collectively have more than 10,000 portfolios and $4 billion on the platform. She is a registered Investment Representative and holds a Series 65 securities license.