It’s often claimed in the world of Wall Street and stock-pickers that the best way to perform as an investor is to hire a broker who allocates your money into pricey actively managed mutual funds. While many trusted financial luminaries, such as our own Burt Malkiel and Charley Ellis, have quashed the claim that active mutual funds outperform their indexing counterparts, big brokerages maintain their worrisome position. In this Wall Street Journal article, contributor Daisy Maxey lays bare the hard facts that prove what Malkiel and Ellis have been asserting all along. Read the column, in full, below.

Active mutual-fund managers say you can’t judge their performance against passive benchmarks over short time periods. Is a decade and a half long enough?

Over the 15 years ending December 2016, 95.4% of U.S. mid-cap funds, 93.2% of U.S. small-cap funds and 92.2% of U.S. large-cap funds trailed their respective benchmarks, according to the latest S&P Indices Versus Active funds scorecard. The analysis, known as Spiva, is published semiannually by S&P Global using a methodology that includes funds that have been liquidated or merged out of existence. 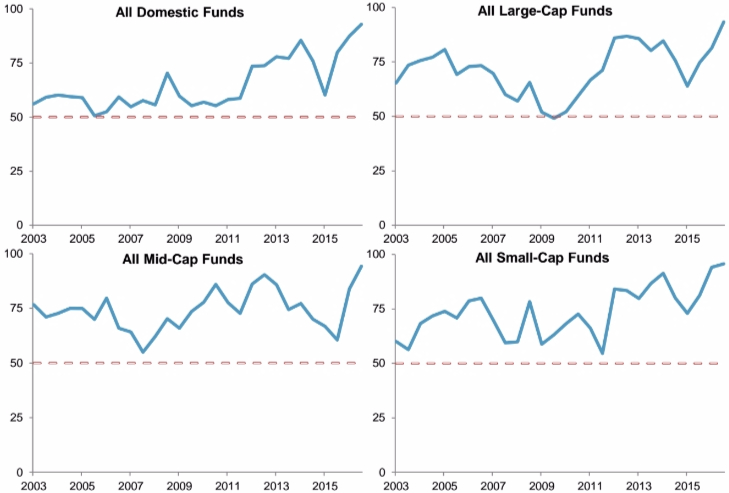 This was the first year that the analysis included 15 years of data, which helps to offer a “more stable narrative,” given that the performance of active managers can vary based on market cycles, says Aye Soe, managing director of research and design at S&P Dow Jones Indices.

“We often hear from active managers, ‘You need to measure us over a longer-term cycle,’” she says. “Even over a full market cycle, which includes peaks and troughs, we still see the majority of active managers performing unfavorably against their benchmarks.”

The results gibe with a recent Wall Street Journal series exploring the rise of passive investing and the notion that stock-pickers can’t pick stocks well –or at least well enough to justify the fees they charge–and that even those managers who do outperform their passive counterparts can’t sustain it year after year.

The Spiva survey period ended during a year of geopolitical tumult of the sort that sometimes is thought to benefit active managers, with market-churning events including Britain’s vote to exit the European Union and Donald Trump‘s surprise election to the U.S. presidency. Yet not even the volatility that came with those events was enough give many more active fund managers the edge over indexes.

Still, some fund managers say active investing has a place in today’s world.

Bob Robotti, president and chief investment officer at Robotti & Co. in New York, has been picking stocks for more than 30 years and says he still believes in it. Mr. Robotti’s investments fell sharply in 2014 and 2015, but outpaced the market in 2016 and have outperformed the S&P 500 so far this year.

Some of the active managers who have lost money to passive funds in recent years may do better going forward because so much money has flooded into index funds stretching valuations, he says. That gives active managers who can be selective in their investments an edge.

But while he maintains faith in active investing, he says he believes that low-fee index funds can produce good returns for those who invest their money over time and stay put.

This article was originally published in the Wall Street Journal on April 12, 2017