Make sure your retirement savings last as long as you do Rebalance‘s Scott Puritz speaks to Tim Grant at the Pittsburgh Post Gazette about the problematic nature of target date funds, and why many investors would benefit to take a less conservative investment route.

Target date mutual funds have become the answer to a problem many retirement savers face in a world that has shifted the burden of managing retirement assets from corporations to workers who don’t always have the time or knowledge to be effective money managers.

The financial services industry came to the rescue by providing a simple investment solution in which workers only needed to pick a date they wished to retire and the mutual fund took care of the hard work by automatically adjusting the asset mix in the account to a higher percentage of safer bonds and a lower percentage of riskier stocks as the account owner’s retirement date neared.

But now, workers often are on the job past the once-common retirement age of 65 — and target date funds haven’t caught up.

When target date funds, also known as life cycle funds, hit the scene in the 1990s, workers who used them were encouraged to choose a target date that corresponded with a planned retirement age of 65. Nearly three decades later, the status quo for most target date funds is still 65, which many financial advisers believe could be too conservative in light of more people working longer and living longer. 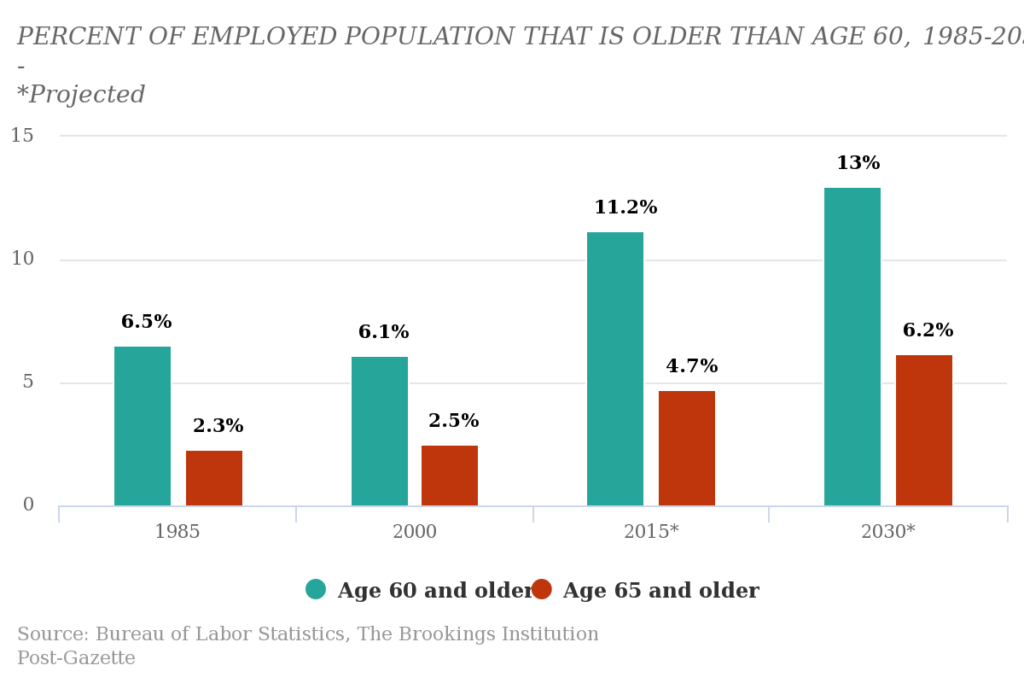 “For most of us, our retirement years will equal that of our working career,” said Jim Meredith, executive vice president of the Hefren-Tillotson wealth management firm, Downtown. “It’s not wise for a 65-year-old person to get overly conservative with their portfolio. A lot of people feel they need to get too conservative as they get older. The question is do they want to earn 2 percent or 10 percent?

“Most target date funds target age 65 for retirement because that’s what the public is asking for,” he said. “The public consciousness is stuck at age 65 retirement, but they would be better off retiring at age 70. Their Social Security benefits would be higher, and they would have five extra years of saving and five extra years of not spending their wealth. The impact over their remaining life would be huge.”

For a typical target date fund set for an age 65 retirement date, the fund would have automatically adjusted to the point where an individual’s portfolio would have an allocation of about 90 percent bonds and 10 percent stocks — at a time when bonds are paying near historic low interest rates.

And the popularity of target date funds in company retirement plans shows no signs of slowing down.

Based on the latest data from U.S. investment companies, more workers are using the “set-it-and-forget-it” approach to retirement investing than ever before.

According to the Washington, D.C.-based Investment Company Institute, 76 percent of 401(k) plans included target date funds in their investment lineup at the end of 2014 compared with 32 percent in 2006.

But critics of this sweet and simple concept wonder how one fund can really suit the needs of everyone who is planning to retire in a given year.

“If I need $40,000 a year from my portfolio in retirement, I can achieve that by taking out 4 percent a year in a $1 million portfolio. But what if I have only a $500,000 portfolio? I need to have an 8 percent return on $500,000 to have the same income as someone with $1 million,” said Paul Brahim, CEO of BPU Investment Management, Downtown.

Scott Puritz, Managing Director of Rebalance, a national low-cost wealth management firm based in Palo Alto, Calif., said for many years the standard practice for investing was to access accounts on the day of retirement. For most people, this meant age 59½ or several years later at age 65.

“Now that the general population is living much longer, this model may be too conservative for most investors,” said Mr. Puritz, whose company manages more than $470 million in client assets. “Investors should target later in life and adjust to a growing life expectancy. We advise that investors aim to take out funds at a midpoint, such as mid-70s.

“The purpose of a retirement fund is to cover your whole lifespan, not just the first few years after you retire,” he said. “Now the biggest risk retirement savers face is not that the stock market will drop, but that typical Americans will outlive their retirement savings.”

Mr. Puritz noted, “It’s important to keep in mind that over any 10-year period from 1928 to 2016, stocks have outperformed bonds on average by over 6 percent per year.”

Wealth managers say more attention needs to be paid to what target date funds do 30 to 40 years after retirement.

“When you retire, you don’t die. You could pick a target retirement age of 65 and then live another 15 to 30 years,” said Ahmie Baum, managing director of the Baum Consulting Group at UBS Financial Services, Downtown. “By picking a target date of age 65, the investor is getting less risky with his investment strategy.”

But Mr. Baum said the trade-off would be that the investor could end up living a few decades beyond retirement with less inflation protection than he would get from owning more stocks due to the heavy weighting of bonds, which pay less yield, in the portfolio.

Target date funds make sense for individuals who want to delegate the risk management and allocation of their retirement account to a professional. But they should keep in mind that their retirement savings need to last a lifetime.

“Each person has a right number for themselves. There is no perfect number for everyone,” said Sean Pearson, a financial adviser at Ameriprise in Conshohocken, Montgomery County. “We don’t advocate targeting age 65 for retirement. For a younger client, it might be a great place to start.

“It gives them the impetus to save a lot for retirement, the opportunity to retire early and the flexibility to make changes if their family situation changes,“ he said. “Setting an earlier retirement date forces clients to save more earlier and that increases the personal savings rate, which is the bigger factor.”