Making Sense Of All The Robo-Advisers 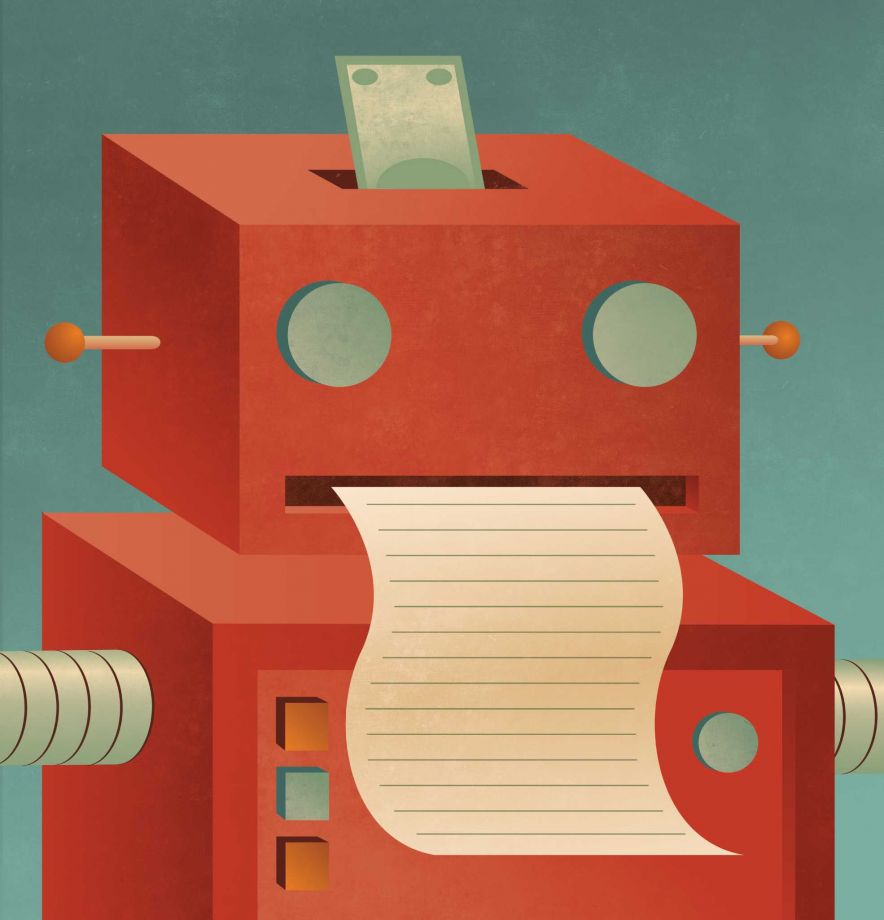 Robo-advisers are supposed to offer a simple, low-cost way to get investment advice, but there are so many popping up you almost need a robo-adviser to help you choose one.

The term loosely describes startups that use technology to deliver money management to the masses. What most have in common is the use of algorithms to make investment decisions and communicating with customers via phone, e-mail or video chat rather than in person.

They take much smaller clients that human advisers, who typically require at least $1 million in investable assets. And they generally put clients into a limited lineup of exchange-traded index funds that charge low fees — usually 0.1 to 0.3 percent of assets per year. The robo-adviser can slap an additional 0.25 to 0.5 percent fee on top and still undercut traditional advisers, who generally charge their smallest clients at least 1 percent of assets.

What they generally won’t do is look at a customer’s entire financial picture — including their 401(k) plan, taxes, mortgage and other debt — because that’s very hard to program into a computer.

Most robo-advisers are based in the Bay Area. They range from glorified target-date mutual funds to firms that provide nearly the same services as human advisers except for in-person consultations.

They have short track records and frequently change business models, so it’s hard to predict how they will do over the long run. But they can help avoid some common mistakes, such as being under-diversified or getting stuck in high-fee, low-performing funds or low-yielding bank accounts. And they can provide some sophisticated services, such as automatic rebalancing (periodically buying and selling to maintain a
set asset allocation) and tax-loss harvesting.

Robo-advisers hate the term; they prefer to be called online, digital or automated investment advisers.

Two of the largest, Palo Alto’s Wealthfront and Personal Capital of Redwood City, have attracted $129.5 million and $104.3 million in venture capital, respectively.

“The financial crisis really drove a lot of entrepreneurial activity into this space,” because it gave big banks and Wall Street a black eye, says Grant Easterbrook, an analyst with Corporate Insight. “This is a rare opportunity where people might trust a new firm.”

Venture capitalists are buzzing around investment advice because it is one of the few sectors that is still people-intensive and ripe for automation, Easterbrook added.

His firm polled 11 leading online advisers in December and found they were giving paid advice on nearly $19 billion in assets, up from $11.5 billion in April.

That growth has attracted the attention of retail brokerages, who are trying to fend off the robos without alienating human advisers who are also big clients. Charles Schwab is rolling out its own robo-advising service; Fidelity and TD Ameritrade will refer clients who want a robotic solution to Betterment and Upside Financial, respectively.

Vanguard has been offering a quasi-robo service since 2013 to customers with at least $100,000. It provides a custom, comprehensive financial plan, portfolio management and a virtual relationship with a certified financial planner. The annual fee is 0.3 percent of assets under management, plus fund fees, which average 0.2 percent. The money is invested in Vanguard funds and rebalanced periodically. Vanguard plans to lower the minimum to $50,000 at some point.

Choosing a robo-adviser can be hard because they vary widely. Some require the customer to open a new account; others work with existing accounts. Some take discretion over accounts (meaning customers give the firm authority to make trades on their behalf), others make recommendations, but require investors to implement the strategy. Easterbrook breaks them into four broad categories, although some could fit into more than one.

The purest robo-advisers are companies such as Wealthfront and Betterment. Investors must open a discretionary account with these firms and fund it with cash. They are best for people who don’t have existing accounts they would have to liquidate, which could trigger taxes.

Their customers go online, answer a few questions about their age, financial situation and risk tolerance, and get a diversified portfolio of ETFs, which the firms manage.

Wealthfront requires a $5,000 minimum, Betterment has none.

Neither firm charges trading commissions or other fees.

Both firms provide automatic rebalancing. Wealthfront offers free tax-loss harvesting on taxable accounts bigger than $100,000, Betterment on accounts above $50,000. Harvesting involves automatically selling investments that have capital losses so they can offset capital gains and reduce taxes. Proceeds are immediately reinvested in a similar fund to maintain exposure to that asset class. (Immediately reinvesting in the same security would invalidate the tax loss.)

Wealthfront is designed for Millennials — 60 percent of clients are younger than 35 — who like doing everything online, although advisers are available by phone or e-mail. “Not only do clients under 35 not call, they would pay us never to call them,” says Adam Nash, Wealthfront’s CEO.

Wealthfront says it has more than $1.5 billion under management. Betterment manages about $1.1 billion.

Their main difference: Wealthfront uses a separate firm, Apex Clearing, to hold customer assets. Betterment holds assets itself. Betterment says this provides a more seamless experience for customers and easier-to-read statements, but some investors prefer keeping their custodian separate from their adviser.

Investors could get a similar set-it-and-forget-it solution, and avoid the robo-advisor fee, by investing in a target date mutual fund. These funds provide a diversified portfolio that is automatically rebalanced to maintain an asset allocation that grows more conservative as the investor gets closer to a target retirement date.

Nash says Wealthfront is better because a 35-year-old with $10,000 might have different needs and risk tolerance than one with $100,000. Wealthfront, he says, can account for such differences. It also exposes
clients to more asset classes, including real estate and commodities, than target-date funds, which invest mainly in stocks and bonds.

Companies similar to Wealthfront and Betterment include Invessence, MarketRiders and WiseBanyan, Easterbrook says.

People with more complex financial lives might consider a company such as Personal Capital, which has about 80 human advisers and associates at a call center in Denver who can look at the customer’s entire financial picture and make recommendations.

The Redwood City firm offers a free program where users can aggregate and track their online financial accounts — including bank, brokerage, credit card, mortgage, employee stock options and 401(k) accounts — in real time. Clients must provide the company with their log-in and password for each account, which some people might not be comfortable with.

Personal Capital makes money when users of this tracking service sign up as advisory clients. The clients must set up an account at Pershing, which Personal Capital manages. Its minimum investment is $100,000. Fees (including commissions) range from 0.89 percent on the first $1 million to 0.49 percent on accounts over $10 million. It invests in individual securities as well as ETFs. It can charge slightly less than traditional firms because clients input data into the tracking program themselves and its advisers communicate via phone or e-mail, not in person. It has nearly $1 billion in assets under management.

Rebalance is similar to Personal Capital in that it has human advisers, but focuses on retirement accounts for people 45 and older. “We open up an IRA at Schwab or Fidelity and manage it for them,” says Mitch Tuchman, the firm’s managing director. (Investors can also roll an IRA into the account). The money is invested in ETFs and rebalanced at least once a year. But it also has human advisers who meet via phone. Take a couple, with each spouse 60 years old. “An algorithm will never pick up that he’s ready to retire, she wants to work 10 years. He is risk averse, she isn’t,” Tuchman says.

The firm has about $235 million under management.

It has a minimum account size of $100,000 and charges 0.5 percent plus ETF fees, which average 0.2 percent. Its investment committee includes noted investors Burton Malkiel and Charles Ellis (who are also involved in Wealthfront).

Another class of robo-advisers gives automated buy and sell recommendations that balance investments across multiple existing accounts. They include Financial Guard, Jemstep, FutureAdvsior and SigFig.

FutureAdvisor has a free service with buy and sell recommendations and a paid service that executes trades. With the free service, which works with hundreds of brokerage firms, “You link your accounts to us, but we don’t store the passwords,” says Chris Nicholson, a spokesman for the San Francisco firm. Customers cannot link 401(k) accounts, but can manually enter the assets so they are included in the overall asset allocation.

For the paid service, which includes tax-loss harvesting, customers must have an account at Fidelity or TD Ameritrade. They can transfer securities into this account from other brokerage firms without selling and triggering tax consequences. The paid service has more than $250 million under management. The minimum investment is $10,000 and the fee is 0.5 percent per year, plus fund fees.

It also puts investors into a diversified ETF portfolio, but will weigh the tax consequences of selling existing positions before doing so.

SigFig of San Francisco also provides free portfolio tracking software and has a similar paid service for accounts at Schwab, Fidelity and TD Ameritrade for an annual fee of 0.25 percent (plus ETF fees). It also recently announced a new fund for retirees who want to withdraw income from their portfolio that requires a minimum investment of $100,000 and a 0.5 percent annual fee.

Another class of robo-advisers will help manage 401(k)s or similar plans. They include CoPiloted, Kivalia, 401kGPS and Blooom. They charge a flat monthly or annual fee rather than a percentage of assets under management. However, workers should first see if their company offers some form of free 401(k) guidance from firms such as Financial Engines or Morningstar.