How Taking a Gap Year Can Shape Your Life

By Scott Puritz on October 25, 2016 in Retirement Investing.

Esteemed New York Times finance columnist, Ron Lieber, recently wrote an article highlighting the many positives that a “gap year” can bring for prospective college students. In his in-depth column, Lieber argues that a gap year can empower young people to make their own life decisions; a year to take time to work toward goals, volunteer, or travel, rather than to hurriedly pursue a possible dead-end degree fresh out of high school graduation. As our team at Rebalance has reiterated time and time again, in order for our sons and daughters to flourish, we must encourage them from a young age to be responsible for not only financial decisions, but life decisions as well. A gap year, according to Lieber, urges college-bound grads to do just that.

If your teenager is talking about taking a year away from the classroom between high school and college, you may have Malia Obama to thank for that. But if they’re not yet talking about whether to follow her lead, they should be.

Taking time off between high school and college or sometime during the undergraduate years, as Ms. Obama is doing before she attends Harvard, has plenty of appeal for high school graduates who don’t know what they want out of college or seek to work, travel or volunteer on the sort of schedule that an academic calendar does not allow.

Parents, however, often worry themselves sick over such talk. While no one wants to drop a six-figure sum on a teenager who doesn’t want to be in school, there are often nagging doubts over whether students who stop for a bit will ultimately get back on track. 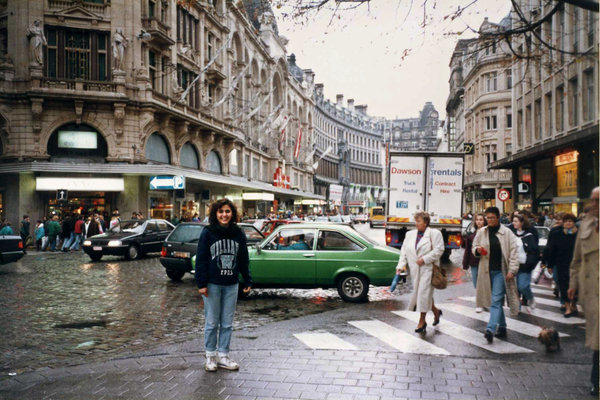 Twenty-five years ago, my friend Colin Hall and I tried to dispel those concerns by finding and interviewing as many students who took gap years as we could. We profiled 33 of them in a book called “Taking Time Off,” which was published 20 years ago.

This summer, after news of Ms. Obama’s choice, I tracked down everyone from the book to see what had become of them. Was their gap year ultimately incidental to their lives, or did it help them grow into the person they were meant to become? And for those who now had children, how would they react if their offspring wanted to take a gap year?

Families seeking data on gap years won’t find much. Part of the problem is that federal data on college delay and completion don’t measure all the reasons people started college late. While some people make a deliberate choice to delay college to serve in the military or work or travel, others meander for a few years before deciding to try college after all.

A number of researchers have shown a connection between a deliberate choice to take some time off and getting better grades upon return to the classroom. Devin G. Pope, a professor of behavioral science at the University of Chicago’s Booth School of Business, saw the link among people who had served at a Mormon mission. Bob Clagett, the former dean of admissions at Middlebury College, saw similar results when he helped inspire number-crunching among students there and at the University of North Carolina.

Once college is over, however, we enter the realm of anecdotal evidence when it comes to first jobs. Parents worry that if their children take a gap year, they will appear wayward to employers, which may have more to do with the term than how that year was spent. “It suggests a hole,” said Abigail Falik, founder of Global Citizen Year, which has 115 people working in four countries. She prefers the term bridge year, with its implication of a deliberate connection between one stage of life and the next.

In fact, logic would suggest that many people who take a gap year get better jobs after college than people who don’t. If you were hiring entry-level employees, wouldn’t you rather employ the risk-taking 23-year-olds who found their way in the world for a while than the 22-year-olds who have not done much besides going to school?

There is no way to know for sure except by asking some of the people who have had the experience. Susie Steele took time off from the University of Vermont to teach disabled people to ski and eventually landed a plum full-time job at the Keystone Science School in Keystone, Colo. Now a middle-school biology teacher in Louisville, Colo., Ms. Steele, 44, figures her odds would have been quite long without the gap year.

Akiima Price took a break from the University of Maryland Eastern Shore to work with the Student Conservation Association in Nevada. The organization eventually hired her full time, and she has forged a career in and around environmental education and community work.

“Now, looking back on my résumé, all of the dots ended up connecting,” said Ms. Price, 44, who lives in Washington. “I would tell younger Akiima to trust the process.”

Parents would be wise to adopt that mantra, too, and not just because tens of thousands of tuition dollars may go to waste if a college student has a burning desire to be elsewhere. Even if a gap year does not lead to a job offer and an obvious career track, it can light a spark that ends up burning in a different way many years later.

Cory Mason spent his gap year as a project manager for Habitat for Humanity in Savannah, Ga. Today, he’s a Wisconsin state representativewho calls on his experience quite often, even if he doesn’t pick up a hammer much these days. “It wasn’t just about housing but more about poverty and how hard it is for working people who still make poverty wages to move into the middle class,” he said. “It gave me as much of a lesson on that as it did on how to frame a house or put shingles on a roof.”

Mr. Mason earned room, board and a tiny stipend during his gap year. And plenty of revenue-neutral or moneymaking gap year experiences are available, despite the phenomenon’s reputation as a sort of rich kid’s layabout. Still, some educators question whether there isn’t some class privilege at work here.

Chad Hammett, who took three semesters off from the University of Texas, now teaches English at Texas State University. He figures that maybe a quarter of the students he encounters would have been better served by a gap year, but he worries about the momentum of the students he sees who are the first in their families to go to college. “This may be their one chance, and any kind of delay would be admitting that they’re not ready and don’t belong,” he said.

For others, however, a year in between was just the thing they needed. Celia Quezada was a first-generation college student and spent a year in Belgium in a Rotary program before beginning her freshman year at Williams College. “Had I not done the exchange program, I would have dropped out just from the culture shock,” she said.

Ms. Quezada, 44, lives in Greenfield, Calif., and is now a first-grade teacher. Her students are too young for any advice from her about possible college paths.

But even the people who took the biggest risks during their gap year wouldn’t hesitate to recommend the experience to their own children.

Eric Van Dusen traveled over land from Argentina to California during his time off, while his wife, Kara Nelson, taught in a migrant camp in Zimbabwe. She is now a professor of civil and environmental engineering at the University of California, Berkeley. They have two children, ages 8 and 12, who will be making their own educational choices soon, or will try to convince their parents that an alternative path is a swell idea. “The idea of knowing that my kids would be out there being autonomous and feeling self-directed and empowered by making decisions themselves makes me really happy,” Professor Nelson said.

Any risk may well be part of the point. Ted Conover took plenty of risks when he rode freight trains with hobos during his time off from Amherst College, and eventually wrote about the experience in his book, “Rolling Nowhere.” “You get to define the terms of the risk,” he said. “Could I hop a train? Handle police? Defend myself? Deal with a blizzard in October or a rainstorm while out in the open? All kinds of things had never been asked of me, and I thought that the time was right to ask myself, to test myself.”

But even if you or your children have no stomach for riding the rails or hitchhiking in Central America, allowing for the possibility of something outside the norm just seems like good parenting. Tracy Johnston Zager took time off to work on Bill Clinton’s presidential campaign in 1992, later studied as a Rhodes Scholar at Oxford and is the author of a coming book called “Becoming the Math Teacher You Wish You’d Had.”

Recently, however, she found herself in a teaching moment in her own home in Portland, Me. Her two young daughters found her examining artifacts from her days of political adventuring. “They didn’t know about any of it,” she said. “They looked at me in a picture with the president and said, ‘Who’s that?’ Maybe it’s time they know this story.”