COVID-19 and the Presidential Election: What to do with your investments Are you nervous about the upcoming election and what it will do to your investments? Rebalance Managing Director Scott Puritz explains trends, what to look for now, and how you can hang on to your money no matter who’s elected.

For many dental professionals, this year has proved challenging in many ways. With 99% of dental practices now reopen, there are some positive signs that the industry is recovering; however, patient numbers still remain around 20% lower than pre-COVID. A recovery is not going to happen overnight. In April, the American Dental Association’s Health Policy Institute models predicted that US dental care spending could decline by up to 66% in 2020 and 32% in 2021.(2) The June update has since seen these figures decrease to a 38% decline in 2020 and 20% in 2021.

Financial concerns experienced by dentists, such as keeping their practices open and managing day-to-day finances, are followed by a secondary concern: what is happening with their investments? As we advised our clients during the worst of the stock decline in March and April, “Stay the course and don’t sell at the bottom of the market. Things have always recovered in the past.” As we predicted, those who stayed the course have seen their investments recover and their portfolios increase in size.

In addition to the concerns caused by COVID-19, the 2020 presidential election seems to have cast doubt over the ability of the economy to recover and, by extension, doubt about the stock market. The most common claim being made is, “A Biden presidency will cause the market to fall.”

Of course, any fall in the stock market is stressful and frustrating for investors, but for long-term investors, such short-term concerns should not factor. Stock market indices, such as the S&P 500, rise over time (figure 1), regardless of which political party is in charge. When planning for retirement investments to last for decades, entering and leaving the market is a risky decision. 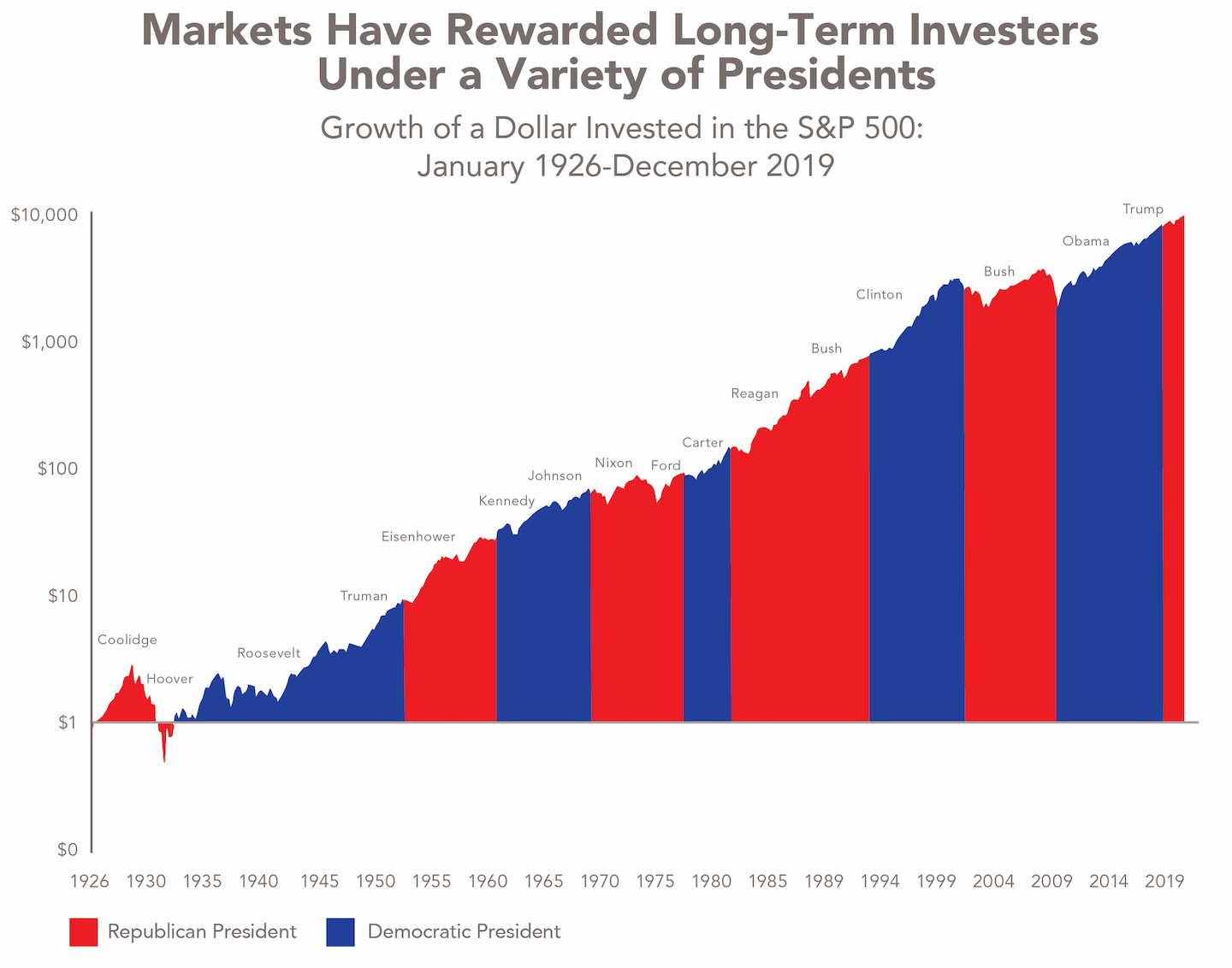 For instance, if you had been fully invested in the S&P 500 Index between January 2000 and December 2019, you would have seen annualized returns of 6.06%. However, if you missed the 10 best days of this two-decade period, this annual return figure fell to 2.44%. Missing the best 20 best days over the same 20-year period saw you gain only 0.08% annually. Timing the market rarely works out. Six of the best 10 days occurred within two weeks of the 10 worst days.

So, what about this election? All of the portfolio growth data shown in this article reflects a 60% equity holding in the S&P 500 and 40% fixed-income portfolio, a common long-term portfolio strategy. Historical data shows us that stock markets tend to behave positively during presidential election years and the year following election years. The stock market has maintained an upward trend regardless of who ends up in the White House.

Rather, drops in the market are typically attributed to concurrent economic conditions, not politics of the moment. Evidence of this can be seen in Figure 2, which shows that long-term average returns are the same during Republican and Democratic administrations for a diversified portfolio of stocks and bonds. During the last 60 years, the average annual return for such a portfolio under Republican presidents was 8.2% per year. For Democratic presidents it was 8.4% per year. 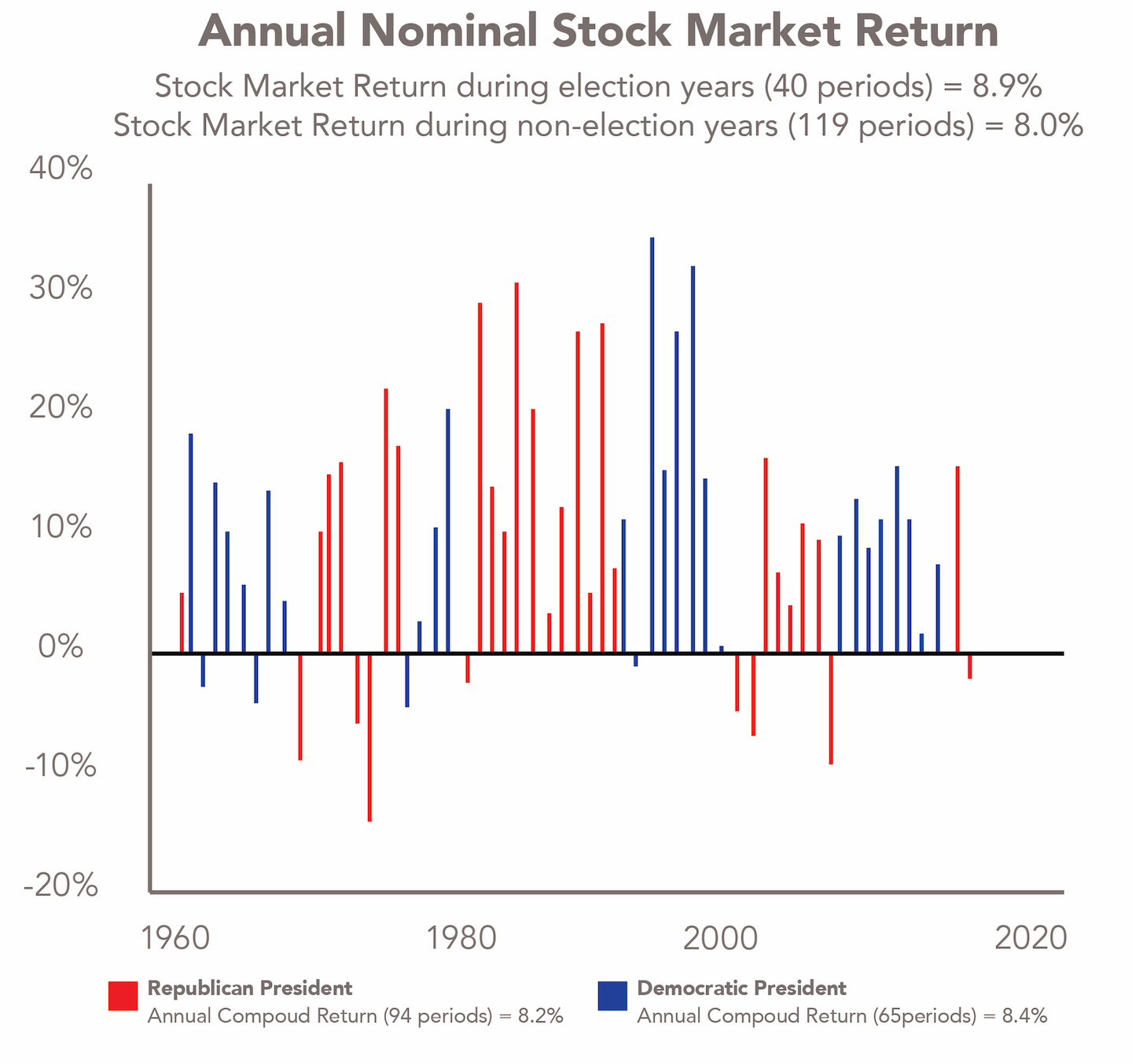 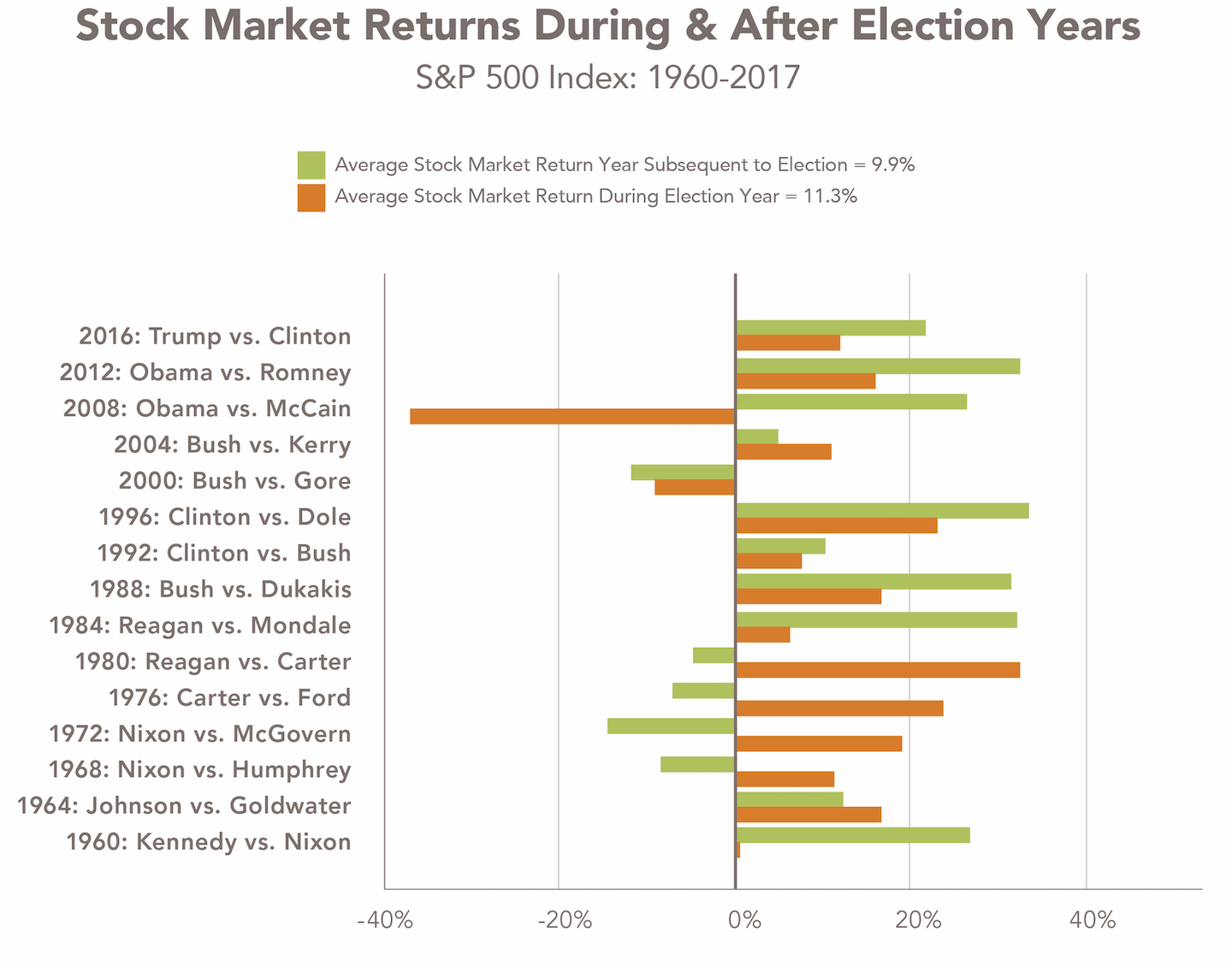 Where we see severe drops in the stock market, such as in 2007-2008, we can easily identify the cause of the crash—the collapse of the US housing bubble and the international banking crisis, not the election of a Democratic president.

Likewise, it was the rapid increase in unemployment and the closure of businesses due to the impact of COVID-19 that caused the most recent fall in the stock market. Rather than the election, what is far more likely to impact the market now is a second wave of the virus, a delay in the development of a vaccine, or renewed widespread economic closures.

Furthermore, the markets have already “priced in” the two broad potential outcomes of the election based on the policies of the candidates and their predicted results. As we move closer to Election Day and the results, the market will only continue to price in the expected result and its likely consequences.

What steps can you take?

So, what can you do to ensure that you continue to be successful with your investments? For one, your current portfolio may not be diversified enough. If you hold a narrow, limited portfolio of stocks and bonds, it would be wise to switch to low-cost and highly diversified exchange-traded funds (ETFs). Historically the evidence is clear: holding a more varied portfolio means that investors suffer less during bear markets yet benefit at the market rate of return during bull markets. Additionally, it is important to make sure that your portfolio is the right mix for your level of risk tolerance, and that your portfolio is rebalanced regularly to ensure that this mix remains the same.

Finally, while the world may look different than it did a year ago, have your financial priorities changed? Maybe you have suffered financial losses this year. Maybe you have decided to retire earlier than expected. Perhaps you are no longer confident that selling your practice will work as a retirement plan. If so, make sure that you have a financial plan in place that reflects your new priorities. If not, then make sure to stay the course and don’t do anything that could jeopardize your plan. If you don’t have a financial plan, it is not too late. Getting one sooner rather than later is likely to leave you much better off and better prepared down the line.